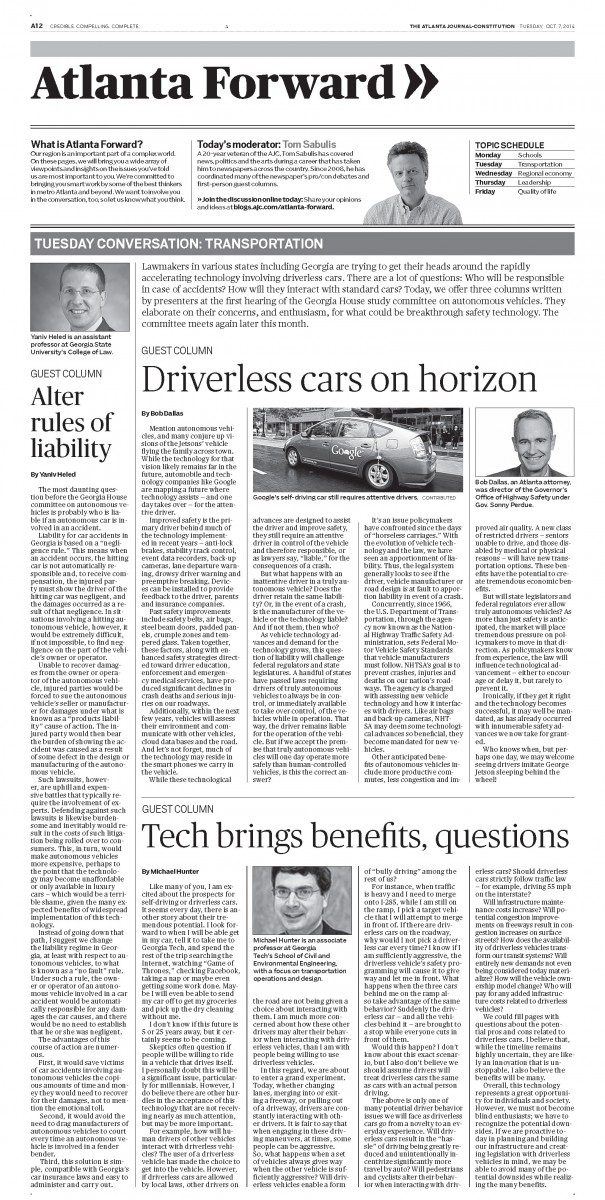 Imagine sharing the highway with cars driven by computers rather than people.

Google is rather famously experimenting with such self-driving vehicles. And a Georgia General Assembly study committee is weighing the issues around allowing these driverless cars on the state’s roads.

The School of Civil and Environmental Engineering’s Michael Hunter has served as an expert witness for the committee and outlined some of the issues in an Atlanta Journal-Constitution guest column Oct. 7.

Read Hunter’s perspective below, and read what other guest writers had to say on the AJC's site.

Like many of you, I am excited about the prospects for self-driving or driverless cars. It seems every day, there is another story about their tremendous potential. I look forward to when I will be able get in my car, tell it to take me to Georgia Tech, and spend the rest of the trip searching the Internet, watching “Game of Thrones,” checking Facebook, taking a nap or maybe even getting some work done. Maybe I will even be able to send my car off to get my groceries and pick up the dry cleaning without me.

I don’t know if this future is 5 or 25 years away, but it certainly seems to be coming.

Skeptics often question if people will be willing to ride in a vehicle that drives itself. I personally doubt this will be a significant issue, particularly for millennials. However, I do believe there are other hurdles in the acceptance of this technology that are not receiving nearly as much attention, but may be more important.

In this regard, we are about to enter a grand experiment. Today, whether changing lanes, merging into or exiting a freeway, or pulling out of a driveway, drivers are constantly interacting with other drivers. It is fair to say that when engaging in these driving maneuvers, at times, some people can be aggressive. So, what happens when a set of vehicles always gives way when the other vehicle is sufficiently aggressive? Will driverless vehicles enable a form of “bully driving” among the rest of us?

For instance, when traffic is heavy and I need to merge onto I-285, while I am still on the ramp, I pick a target vehicle that I will attempt to merge in front of. If there are driverless cars on the roadway, why would I not pick a driverless car every time? I know if I am sufficiently aggressive, the driverless vehicle’s safety programming will cause it to give way and let me in front. What happens when the three cars behind me on the ramp also take advantage of the same behavior? Suddenly the driverless car — and all the vehicles behind it — are brought to a stop while everyone cuts in front of them.

Would this happen? I don’t know about this exact scenario, but I also don’t believe we should assume drivers will treat driverless cars the same as cars with an actual person driving.

The above is only one of many potential driver behavior issues we will face as driverless cars go from a novelty to an everyday experience. Will driverless cars result in the “hassle” of driving being greatly reduced and unintentionally incentivize significantly more travel by auto? Will pedestrians and cyclists alter their behavior when interacting with driverless cars? Should driverless cars strictly follow traffic law — for example, driving 55 mph on the interstate?

Will infrastructure maintenance costs increase? Will potential congestion improvements on freeways result in congestion increases on surface streets? How does the availability of driverless vehicles transform our transit systems? Will entirely new demands not even being considered today materialize? How will the vehicle ownership model change? Who will pay for any added infrastructure costs related to driverless vehicles?

We could fill pages with questions about the potential pros and cons related to driverless cars. I believe that, while the timeline remains highly uncertain, they are likely an innovation that is unstoppable. I also believe the benefits will be many.

Overall, this technology represents a great opportunity for individuals and society. However, we must not become blind enthusiasts; we have to recognize the potential downsides. If we are proactive today in planning and building our infrastructure and creating legislation with driverless vehicles in mind, we may be able to avoid many of the potential downsides while realizing the many benefits.

Michael Hunter is an associate professor at Georgia Tech’s School of Civil and Environmental Engineering, with a focus on transportation operations and design.