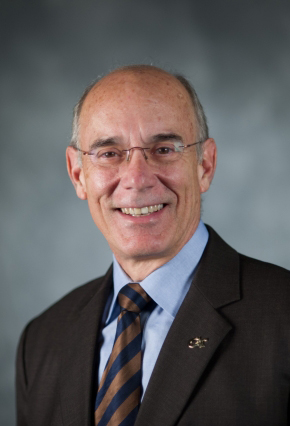 A study by Rafael L. Bras advancing the modeling of river watershed evolution in semi-arid areas has been named an Editor’s Choice by the journal Water Resources Research.

Awarded to only the top one percent of published articles each year, the Editor’s Choice Awards recognize work that’s significant, novel, and original and has broad implications, according to the journal’s editors.

“It is always a particular honor to be recognized for scholarly work, but it is an even greater pleasure when the honor is shared with members of my extended ‘scholarly’ family,” said Bras, provost and executive vice president for Academic Affairs. “All authors were my students, or students of my students, and to a professor nothing can be better.”

Bras, who holds the K. Harrison Brown Family Chair, is also a professor in the School of CIvil and Environmental Engineering.

Water Resources Research is the premier journal of hydrology and water science and is published by the American Geophysical Union (AGU).

The researchers will formally receive the award at AGU’s fall meeting in San Francisco, December 2016.